The highlight of Higashi-Fushimi Inar

Fushimi Inari in the east

Higashifushimi Inari Shrine was built with the wish of a believer living in the Kanto region, who worships the god of Fushimi Inari Shrine in Kyoto.
The time was in 1949.
After that, it is popular as Fushimi Inari in Tokyo.
Although its history is not so long, its shrine is now selected as one of the New Hundred Scenic Views of Tokyo because of its brilliant and vivid atmosphere.
The shrine, which was created by the feelings of dedicated believers who strongly believed in Inari-god, was a very beautiful appearance.

Be fascinated by the irregular Torii gates

On the back side of the vermilion shrine, there is a thousand torii gates.
The irregular torii are mysterious like a maze.
The back of the shrine is surrounded by trees and just quiet.
It is a sacred sign that makes you feel that you have entered God’s domain.
When there were no other worshippers, it was a space where as if God and I alone are facing each other
The torii gate, where only the light of the sunbeams enters, is very beautiful with a vermilion shine.
As you go through the sacred area like a maze, you’ll get the illusion that you’re lost in the mysterious charm of the torii.
I had a mysterious time.

The profits of the 18 subordinate shrines are different, and it seems that there was a lot of power by visiting.

This place has a quiet and sacred sign.
I visit all subordinate shrines heartily.
It is difficult because there are a lot of shrines, but please visit all.

・Car
there is car parking 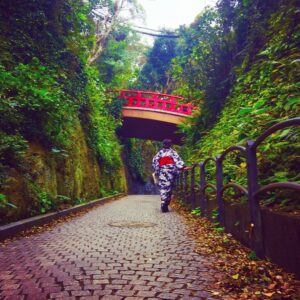